Chat with us, powered by LiveChat Chris Linnitt | Personal Injury Story | Beyond Legal 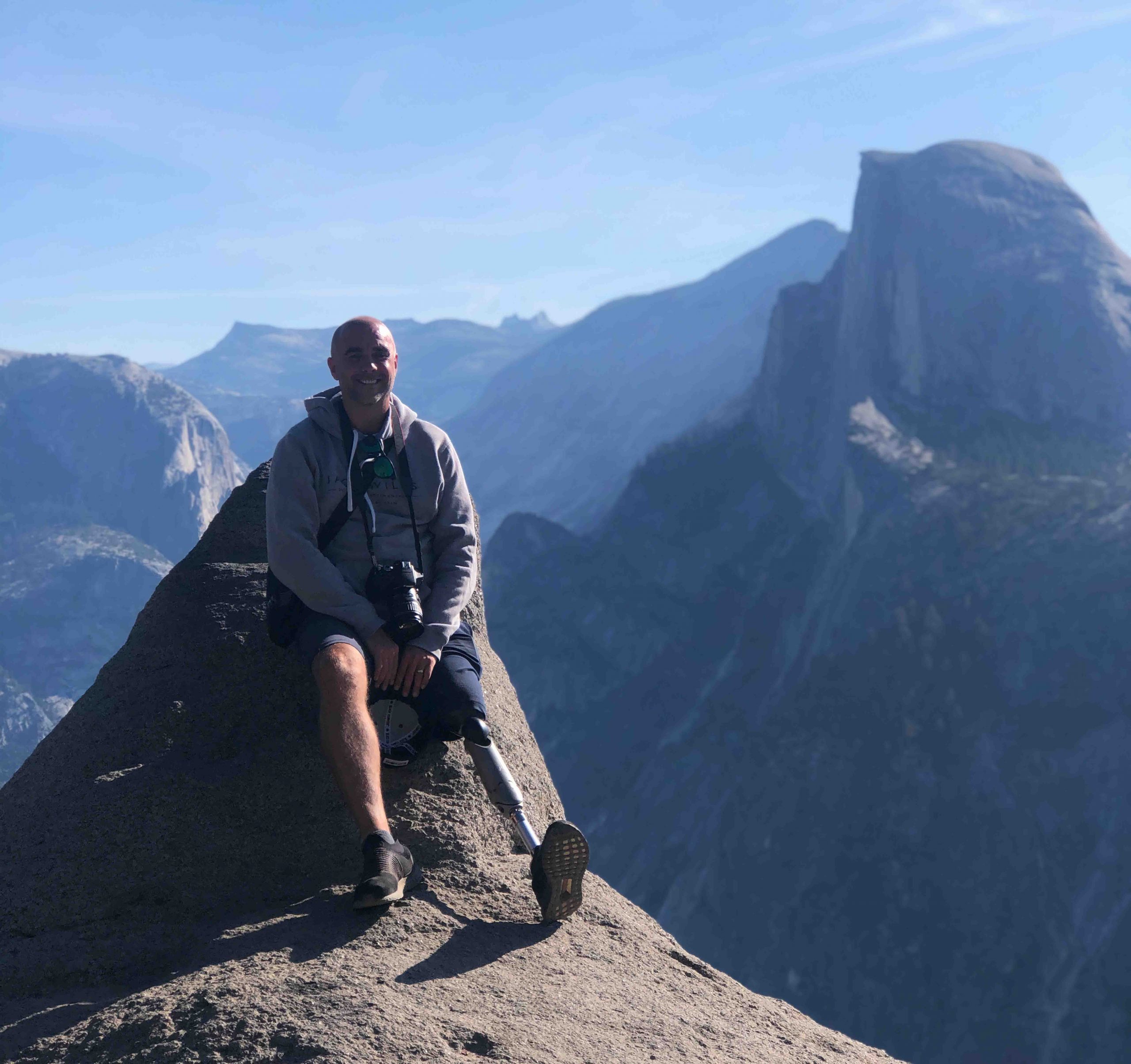 For four years I lived with the consequences of a painful leg injury. Then I made the tough decision to amputate… 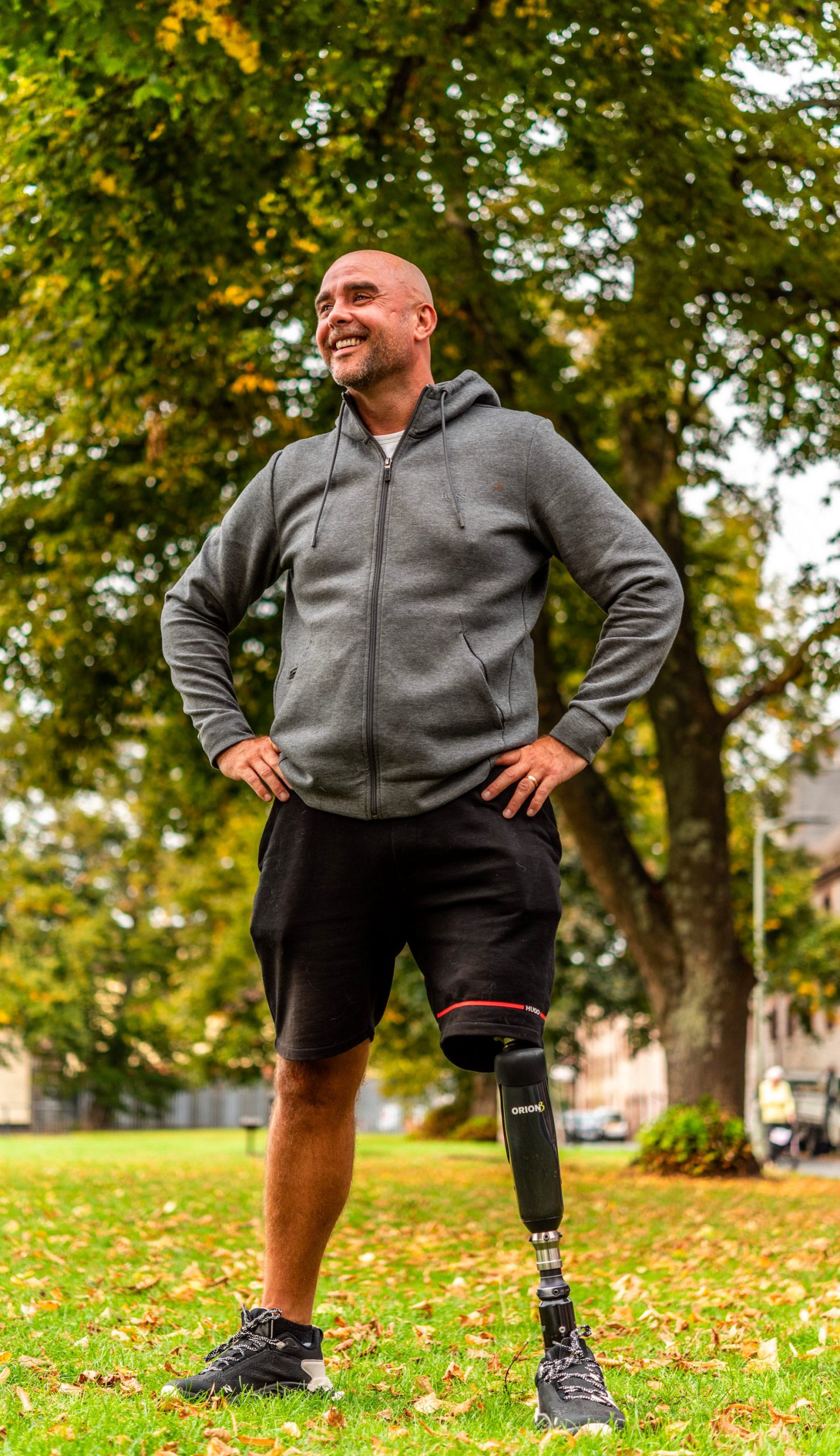 Why are Beyond Legal true Specialists?

Back in 2001, I was employed by a legal firm in Paignton as a personal injury claims advisor. They offered to cover the cost of a course through ILEX (the Institute of Legal Executives, one of the three main routes to becoming a qualified lawyer) which I found extremely challenging. Because I was getting married at the end of April 2002, I decided to postpone my exams until November of that year. At about 8.15am on 14 August 2002, while travelling to work on a scooter, I was hit by a Cherokee Jeep. I was left with serious head injuries and a very badly broken leg – the latter requiring several operations and the fixing of an external-fixator. After four weeks in hospital, and two days at home, I insisted my wife took me out in the car “for a drive”. While waiting at traffic lights, we were hit by car from behind; my wife had serious whiplash, which meant that she was unable to care for me.

I was also affected by serious post-traumatic stress disorder but, with the support and encouragement of family and colleagues, I was determined to sit my ILEX exams the following May. My wife, Clare also studying through ILEX to become a solicitor, was a great encouragement. During my studies, though, I had numerous further operations on my leg and face. Around this time I was told that I needed a bone graft on my leg because a serious fracture hadn’t healed – and if left untreated, the only option was amputation. The bone graft was extremely painful, but still I continued with my studies, with ILEX arranging for an invigilator to come to my house, enabling me to sit my exams at home. I’d also investigated the possibility of having my leg amputated as I was living on a diet of pills to kill the pain. After our first son was born, I looked in the mirror and saw a young man with the shape of a 90 year old; in serious pain, my leg was deformed and I felt I was restricting everyone around me. It was then that I contacted Exeter Mobility Centre, where I was treated like a human being and told I wasn’t “crazy” for wanting to have my leg amputated. I also spoke to amputees who had had their limbs removed as a result of injuries. They all seemed to have a much better quality of life than me. After discussing it with my wife, I made my decision. I sat my last ILEX exam in June 2006, and passed. The day after I received the news, my left leg was amputated above the knee.

For four years I lived with the consequences of a painful leg injury. Then I made the tough decision to amputate…

I gained Fellow status in January 2007 and consequently proceeded to set up a specialist limb loss and catastrophic injury department within a firm in Tavistock. Clare & I then decided to take the next giant step of setting up our own law firm, Linnitts Solicitors. Since then we have rebranded as Beyond Legal. There are very few legal firms specialising in amputee or catastrophic claims; as an amputee, I believe I can relate to people’s circumstances as well as providing legal expertise in this field. I can show clients that their life is just beginning by identifying their needs early and leaving them confident that their claims are being managed proactively, in turn enabling them to concentrate on their own rehabilitation.

Every day to me is unique and extremely challenging. Although I do not require special adaptations, I have difficulty each morning actually fitting the leg on my residual limb. I also face the burden of people not realising that I have one leg; I am often bumped into by people at a supermarket or in the street, causing me to lose my balance and fall or I may simply slip. However, I work full-time and, should I ever need any help, all I have to do is ask. I live a normal life, though I am always somewhat surprised when people see me without my leg as they simply do not know where to look or what to say. I feel this is why I can offer potential clients a unique service, because I truly understand the everyday hurdles they have to overcome.

I feel this is why I can offer potential clients a unique service, because I truly understand the everyday hurdles they have to overcome.

I recently attended the Paralympics talent day in London and have been selected to train in archery for the 2012 Paralympics, subject to being successful in various tournaments. Unfortunately, I have been unable to dedicate my time to the training and put 100% into Beyond Legal. None of the above would be possible if it were not for the fantastic people that I have met. My wife has supported me through everything, as have friends and colleagues. Being a legal executive is extremely challenging and rewarding, I feel a strong sense of achievement and am very proud of my ILEX qualification. My career is a promising one and I now look forward to each day.

We offer an initial free consultation, allowing us to get to know you & the services you require. Even if your particular circumstance is not listed on our website, please get in touch with us as it is highly likely we will still be able to help & advise you further.

Take the next step

Our trustworthy and caring professionals are waiting to help you with the exciting next chapter of your journey.

We’d love to talk to you about how we can help. Contact us today for a free initial consultation.

This website uses cookies to improve your experience while you navigate through the website. Out of these cookies, the cookies that are categorized as necessary are stored on your browser as they are essential for the working of basic functionalities of the website. We also use third-party cookies that help us analyze and understand how you use this website. These cookies will be stored in your browser only with your consent. You also have the option to opt-out of these cookies. But opting out of some of these cookies may have an effect on your browsing experience.
Necessary Always Enabled
Necessary cookies are absolutely essential for the website to function properly. This category only includes cookies that ensures basic functionalities and security features of the website. These cookies do not store any personal information.
Non-necessary
Any cookies that may not be particularly necessary for the website to function and is used specifically to collect user personal data via analytics, ads, other embedded contents are termed as non-necessary cookies. It is mandatory to procure user consent prior to running these cookies on your website.
SAVE & ACCEPT